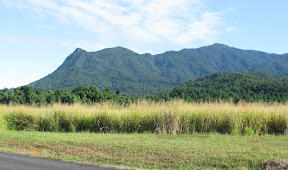 When I found out we were invited to a wedding back home in Cairns, and in July (the tropical dry season), I knew it would be the perfect opportunity to walk to the summit of Mt Bartle Frere, in Wooroonooran National Park. This had been on my to do list for many years!

At 1622m, Mt Bartle Frere is Queensland's highest mountain. It gets up to 12 metres of rain a year, but we were lucky enough to have fine weather. I wouldn't recommend doing this track if it was wet; it was hard enough when it was dry. 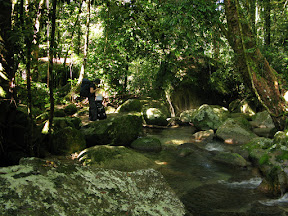 After spraying "Rid" over our socks and shoes (a Leech prevention measure which seems to work), we left Josephine Falls car park around 9:30am. The first part of the track was quite easy and after an hour we arrived at Majuba Creek, a beautiful spot surrounded by some huge granite boulders. This would be a great place to come for lunch and a swim in the warmer months, avoiding the crowds at Josephine falls.

The next leg sees the rainforest thicken as the track winds along a sharp ridge. We arrived at Big Rock camp around midday. Its a nice little camp site on Majuba creek. There was a couple of guys sprawled out and looking a bit worn out. They had just descended and they said the walk was tough and their night was very cold. 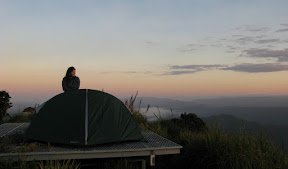 After Big Rock camp, the track becomes very steep. It was three to four hours of hard slog before the the forest opened up and we finally got some views of the mountain side and coastline. Another 30 minutes and we were at our camp site for the night: the Eastern Summit camp which is 300 metres vertically below the summit. There was an evacuation hut and a helicopter/camping pad constructed of lattice-like aluminium. A sign advised either sleeping in the hut or pitching a tent on the helipad. We choose the helipad as it afforded the best views. After a 30 minute trip down to a stream to fetch some water, we settled in with some warm drinks and watched the sunset. Anything that was left outside the tent was quickly covered in condensation; I guess we were in the clouds. 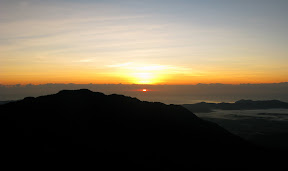 The next morning we watched the sunrise while breaking the fast. We fetched some more water, packed up, and put our packs in the emergency hut; we were happy to ditch the weight while we made the final ascent.

The track to the summit passes through a field of large granite boulders. The route is marked by orange arrows and the boulders provide plenty of grip (in the dry at  least), but Nina found some of the sections a little bit challenging. There are good views throughout this section. Closing in on the summit, thick rainforest returns. We know we have reached the summit after seeing a sign declaring this as the highest peak in Queensland. There was a rock outcrop providing great easterly views. This is where I popped the question and thankfully got a reply in the affirmative. 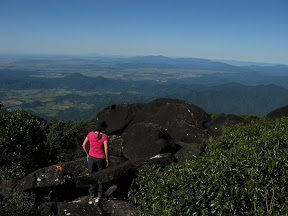 We then headed back down the way we came. The descent was very hard on our legs, our knees in particular. On reaching Majuba Creek we removed our shoes and relaxed with our feet in the water. It took three hours to get from the summit to Big Rock camp. We spent an hour at Big Rock camp, then it was another two hours back to the car, so the descent took around six hours in total.