Flinders in the new Suzuki 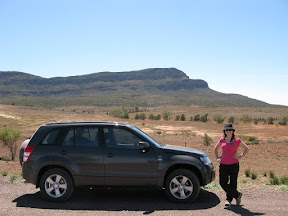 It has a 2.4L 4 cylinder VVT engine, good for 122kW and 225Nm, proper low range four wheel drive, half decent ground clearance (200mm) (although my brother would laugh at this), great entry and departure angles, pretty good fuel economy, nice simple clean lines inside and out, and it drives very well. It also has all the mod cons :). Anyway, we got a chance to take it up to the Flinders National Park, have some fun and get it nice and dirty :). 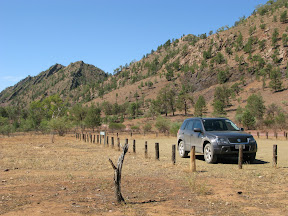 We headed up over the Adelaide Cup long weekend, leaving mid Friday afternoon and getting back late Monday afternoon (Fri 06 March - Mon 09 March 2009).

We stayed at Mt Remarkable National Park (which is around half way to the Flinders) on the Friday night. This way a great way to do it, as it breaks up the 7 hour trip to the Flinders and it is a very nice camp site, and it even has hot showers! There were only a few people camping there.

The next day we left early, heading north to Port Augusta where we did a whirl wind driving tour of the town. We then headed east towards Quorn; the trip though the ranges was quite scenic, and we caught a glance of Dutchman's Stern Peak (where we'll be heading with some friends later this year). We stopped at Death Rock (oooh, scary) and had a look around and then headed for the Flinders. We drove through the park to Bunyeroo Gorge, stopping at various lookouts on the way; there were some great views! 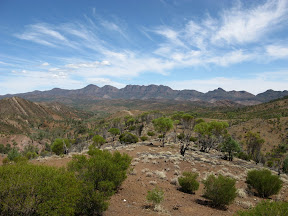 When we got to the gorge we did a 3-4 hr walk down through it; Quite a nice walk. 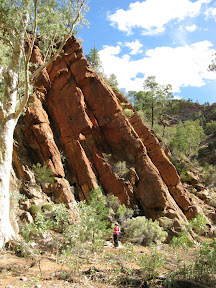 That night we camped at the Acraman Campground, which is right on the gorge. It was a great site, and we had it all to ourselves, except for the local swarm of flies of course... 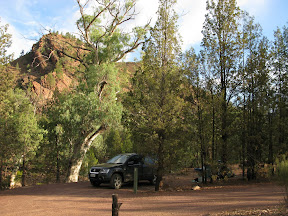 The next day we did a bit of car touring. We traveled through Brachina Gorge and back, and as you drive through the gorge you literally pass millions of years of geological history. The pushed up and folded nature of the Flinders mountains provides this feature. We spent the rest of the day visiting Appealimma Ruins (an old mining settlement), Stoke's Hill Lookout, Huck's Lookout and the Perawurtina Site (Aboriginal engravings).

That night we camped at the Dingley Dell camp-site, which was a bit sparse - probably the worst site in the park - but given the very high standard through out the park, it was still a good site. 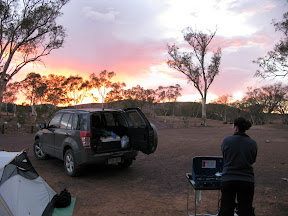 The next day we headed north to a small town called Blinman, then west through the Parachilna Gorge to Parachilna - it was a great drive. 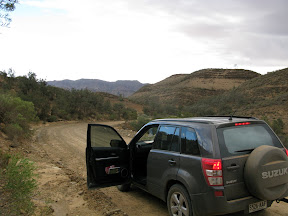 We stopped at the very start of the Heysen trail in Parachilna Gorge (we'll do the Flinders arm of that one day :)). We then headed home, stopping at the Stone Hut Bakery for one of their famous pies - heh, Nina had a pie floater, it was huge :).

It was a great weekend, and the Vitara did well, although the most serious work it did was driving through the rocky, dry gorge creek beds. The only money we spent during the weekend was for fuel, as our SA National Park's pass covered all our park entry and camping fees.