Fiji with the boys

I recently traveled to Fiji with some high school mates, Garry, Scott, Adrian and Ryan. We hadn't gathered together for around 8 years (I think that is what we worked out), so this was kind of a reunion. We stayed at the Radisson Resort on Denarau Island near Nadi (pronounced Nandi by the way). We were in Nadi for 5 nights; Friday 13 June 2008 to Wednesday 18 June 2008.

We did a trip to the Mamanuca Islands on the Seaspray. We did some snorkeling on the Island of Monuriki (which is apparently where the Tom Hanks movie Cast Away was filmed), and visited a Fijian village on the Island of Yanuya, where we took part in a Kava ceremony. The Kava looked like muddy water, and tasted a bit like it too, but not all together unpleasant. It didn't have much of an effect, we needed more than one cup!

We did some sight seeing on some hired scooters, which was a lot of fun, except for the cover of grime we gathered after being stuck behind trucks spewing out Diesel exhaust. We rode up to Lautoka (which is North of Nadi) and back, and also rode around Nadi itself.

There was lots of swimming and kayaking etc., and just a few drinks here and there too. I really liked the local Fiji Bitter beer!

A good time was had by all! See some photos at: 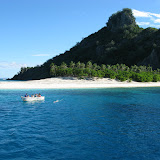